Italy Bets on a Lottery to Tame Tax Evasion

Italy Bets on a Lottery to Tame Tax Evasion

Italy Bets on a Lottery to Tame Tax Evasion – Italy is rolling the dice on a new attempt to stamp out tax evasion: a lottery in which only people who ask for receipts can take part.

Beginning Jan. 1, shoppers will receive a virtual ticket for each euro they spend in any store, so long as they ask for a receipt. Seven people will win 5,000 euros, equivalent to about $6,100, each week, with a top prize of €5 million at the end of next year.

The idea is to use the allure of cash prizes to ensure transactions are recorded and a levy is paid on them in a bid to reduce the tax dodging that has weighed on Italy’s economy for decades. The lottery complements another program in which shoppers can get cash back of up to 10% of whatever they spend until the end of the year, up to a total of €150, if they use their card.

Italy isn’t the first country to try the approach. Governments in several countries have turned receipts into lottery tickets to persuade shoppers to demand that their purchases go on the books, including China, some states in Brazil, the Czech Republic and Portugal. Some have found it an effective way to increase tax revenue without increasing rates.

Some Italians are enthusiastic. Raffaele Sorrentino, a 23-year-old software developer from Naples, is one of five million Italians who signed up for the cash-back program and two million who downloaded a code to participate in the lottery. 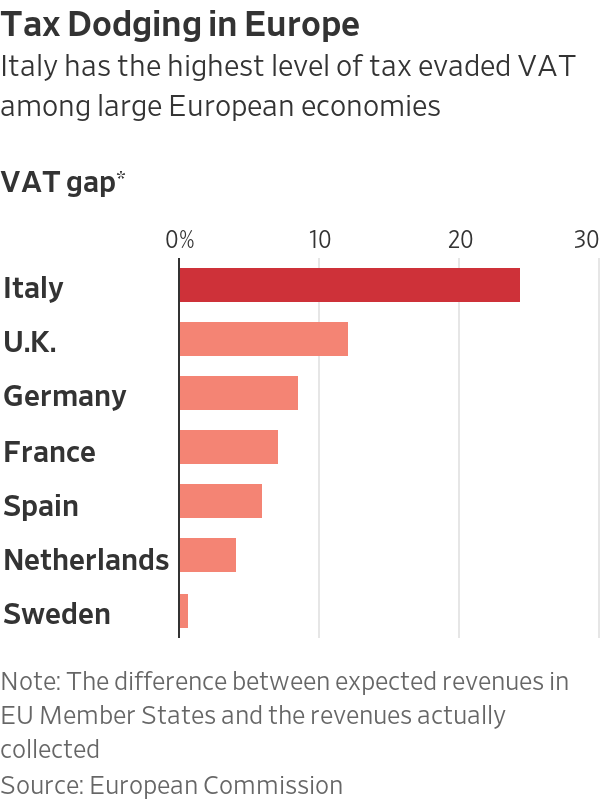 “I have been waiting for it for months, I am enthusiastic about it,” Mr. Sorrentino said. “I never win anything, but you’ll never know.”

Italian governments have tried repeatedly to bring tax evasion to heel, with little success. In 2011, the country outlawed any cash payment of above €1,000 before later raising the level to €3,000 and then pushing it down again to €2,000 this year. Italy’s audit court estimates that the state still loses around €100 billion—or 6% of gross domestic product—to tax evasion each year. A third of that is a result of businesses not paying value-added tax.

Elsewhere, India in 2016 replaced its largest and most widely used bank notes in a bid to reduce tax dodging, crime and corruption. Notes roughly equivalent to $100 and $20 were rendered unusable overnight. Central banks in the eurozone stopped issuing the region’s €500 note in 2019 to stop criminals from benefiting from its high face value, while countries from the Philippines to Denmark have changed regulations to nudge people toward electronic payments.

The Covid-19 pandemic has given authorities a further incentive to discourage the use of notes and coins, which can carry the virus. Convincing more people to use cards could go some way to addressing Italy’s tax-collection problem.

A survey conducted this fall by market-research company Nomisma, pollster Ipsos and credit association Assofin found that eight out of 10 respondents had bought something online, with nearly a third saying they had spent more online than before the pandemic.

There is further room for electronic payments to grow. According to the European House – Ambrosetti, a consulting firm, Italy saw 61 transactions per capita paid electronically in 2019, compared with 370 in the U.K. and 217 in France. Across Europe, only Romania and Bulgaria recorded lower numbers.

Old habits die hard. People here make 86% of their transactions in cash. The Bank of Italy in a survey last year found that Italians often prefer to do so because cash is always accepted; is a quicker, safer, anonymous way of paying; and allows for better control of how much they are spending.

By effectively enlisting people to demand receipts, authorities hope to shrink the scope for store owners to omit income in their tax declarations.

“We citizens will become volunteer inspectors of the tax agency, if I can put it this way,” said Federico Arceci, 33, from Fano, who will participate in both programs. “If it really helps combat tax evasion, then it will be a good incentive.”

Not everyone is so keen. Distrust of the government is widespread and some see the lottery and cash-back programs as impractical. Others don’t want authorities to see what they are buying or how much they spend, or think cash is simpler. 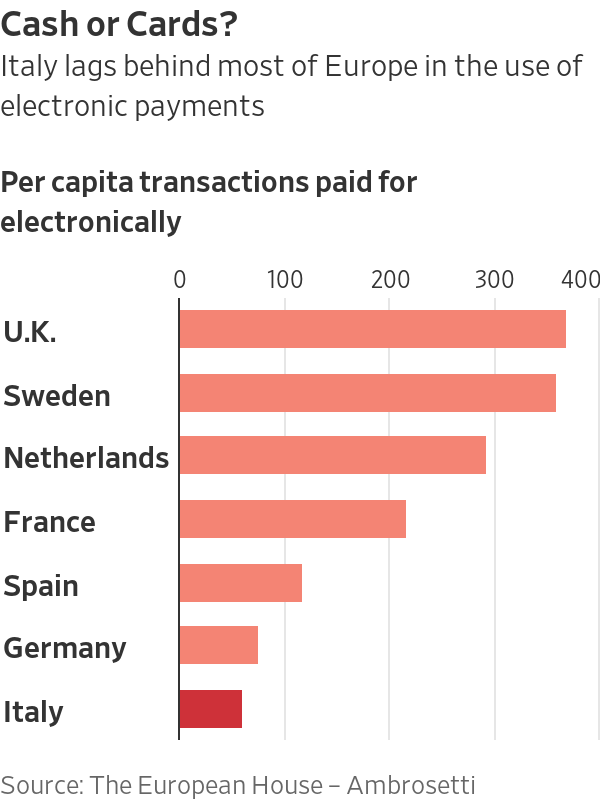 “It’s just easier to control how much you are spending if you pay with cash,” said Roberta Zanlunghi, a 49-year-old waitress from Pavia. “Plus, to get a decent amount of money back you have to spend a lot in less than a month. Spending €1,500 in 20 days to get the top amount back—it’s a lot of money for many people.”

Ms. Zanlunghi said that out of 20 of her friends and clients she asked, none had signed up for the cash-back program.

The owners of the restaurant where she works are skeptical, too. To take part in the receipts lottery, they would need to spend more than €200 to adapt the cash register so it can scan a code, she said.

Around half of small retail businesses aren’t ready yet, said retailers association Confesercenti, partly because they don’t want to pay for the cost of making their tills compatible.

The European Central Bank said the cash-back program offered a disproportionately large reward to people using cards, and that Italy should find a more measured way of encouraging digital payments. Italy’s Treasury said the plan doesn’t penalize cash payments and that it would press ahead with it.

It plans to repeat it twice next year over a six-month period, when Italians will also be able to compete for the so-called super cash-back—a €1,500 prize for each of the first 100,000 participants to switch to card payments.

“To have some chance I will need to start going to the supermarket three times a day and get in the first round a can of tomato sauce, in the second a packet of spaghetti and then some fruit and vegetables in the third,” joked Andrea Splinakis, a 48-year-old engineer from Treviso who has registered for the cash-back program.

Mr. Sorrentino, the software developer, said he hopes more businesses will sign up for the lottery so he can start dreaming of landing a big-money prize.

“I can understand that someone isn’t interested or doesn’t want to participate,” he said. “But this is why it’s optional. In the end, it’s a game.”

Pfizer Vaccine Is Highly Effective After One Dose and Can Be Stored in Normal Freezers, Data Shows

How Will Covax Deliver Covid-19 Vaccines to Poorer Countries?

Business Travel Was Terrible—and I Miss It So Much

Three Astros Were Suspended for Cheating. Two Are Already Back.